Adobe has released patches addressing a wave of critical flaws in its Framemaker and Flash Player products, which, if exploited, could lead to arbitrary code-execution.

Overall, Adobe stomped out flaws tied to 42 CVEs for its regularly scheduled February updates, with 35 of those flaws being critical in severity. That trumps Adobe’s January security update, which addressed nine vulnerabilities overall, including ones in Adobe Illustrator CC and Adobe Experience Manager.

Adobe Framemaker, a document processor designed for writing and editing large or complex documents, including structured documents, took the brunt of this month’s patches with the most (21) critical flaws.

“This update addresses multiple critical vulnerabilities,” according to Adobe in its Tuesday update. “Successful exploitation could lead to arbitrary code-execution in the context of the current user.”

Users are urged to update to version 32.0.0.330 in a “priority 2” update, which means the update resolves vulnerabilities in a product that has historically been at elevated risk. This priority level makes sense as Flash is known to be a favorite target for cyberattacks, particularly for exploit kits, zero-day attacks and phishing schemes. Adobe for its part announced in July 2017 that it will no longer update or distribute Flash Player as of the end of 2020, leading to browsers to turn off Flash Player default support. For instance, Mozilla announced it will kill default support for Adobe Flash in Firefox 69, while Google dumped default Flash support in Chrome 76. 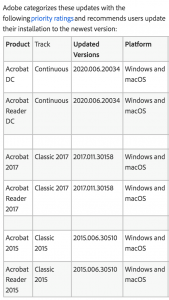 Adobe Digital Editions, Adobe’s eBook reader software program, also has a critical and an important flaw in versions 4.5.10 and below. The critical flaw stems from a command-injection glitch (CVE-2020-3760) opening affected systems up to arbitrary code execution. Command-injection attacks are possible when an application passes unsafe user supplied data (such as forms or HTTP headers) to a system shell.

The important flaw is a buffer error (CVE-2020-3759) enabling information disclosure. Users are urged to update to version 4.5.11 for Windows.

Adobe said that it’s not aware of any exploits in the wild for patched flaws this month.

Learn how Operational Technology and Information Technology systems are merging and changing security playbooks in this free Threatpost Webinar. Join us Wednesday, Feb. 19 at 2 p.m. ET when a panel of OT and IT security experts will discuss how this growing trend is shaping security approaches for IoT and 5G rollouts. This webinar is for security and DevOps engineers, IoT edge developers and security executives.