A reported ransomware attack on Cox Media Group (CMG) has crippled streaming and other internal operations of dozens of radio and television stations scattered across America’s 20 broadcast markets.

CMG has won’t comment on the reported attack and hasn’t responded to a request for comment. A member of Atlanta’s WSB-TV news team, a Cox affiliate impacted by the outage, also declined to provide Threatpost with an update on operations and referred media inquiries to CMG corporate. 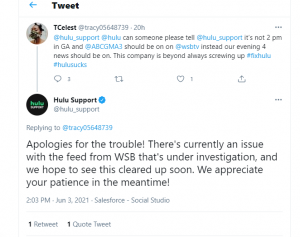 Streaming appears to be functioning normally at affiliates including WSB-TV Atlanta and Boston 25 affiliate.  However, the CMG’s radio stations don’t appear to be 100 percent back online. Threatpost found streaming was down for The Eagle 80’s Rock Hits in Dayton, Orlando’s 96.5 WDBO and other CMG radio stations checked at the time of publication.

Yet Another Ransomware Attack

The likely cyberattack and subsequent disruption of broadcast communications is just the latest critical – or otherwise vital – computer infrastructure crippled by ransomware attacks. The attack also dovetails an announcement by the U.S. Department of Justice that it is applying the same tactics to root out ransomware operators as it does with terrorists.

“It’s a specialized process to ensure we track all ransomware cases regardless of where it may be referred in this country, so you can make the connections between actors and work your way up to disrupt the whole chain,” John Carlin, principle associate deputy attorney general at the Justice Department told Reuters.

Besides the fallout from the nearly week-long crippling of the Colonial Pipeline, JBS Foods, a global food distributor and Japanese conglomerate Fujifilm both confirmed massive ransomware attacks on operations.

While the federal law enforcement steps up its efforts to track ransomware operators, Kunal Anand, chief technology officer with Imperva is calling on the U.S. government to provide direct support to the private sector.

“The Federal government needs to step up – more than ever – to help businesses that are vulnerable and unaware of how to protect themselves from the growing volume of ransomware attacks and other cyber-attack risks,” Anand said.

He argued the U.S. government should consider allocating resources to create a government-run agency mandated to help the private sector with ransomware prevention and mitigation resources.

“At a time when the nation is under siege by ransomware attacks that are disrupting daily life, the U.S. Government needs to ask industry leaders to donate their time – whether it’s helping provide recommendations, setting up resource groups, etc. This should be seen as a patriotic duty,” Anand said.

Join Threatpost for “A Walk On The Dark Side: A Pipeline Cyber Crisis Simulation”– a LIVE interactive demo on Wed, June 9 at 2:00 PM EDT. Sponsored by Immersive Labs, find out whether you have the tools and skills to prevent a Colonial Pipeline-style attack on your organization. Questions and LIVE audience participation encouraged. Join the discussion and Register HERE for free.